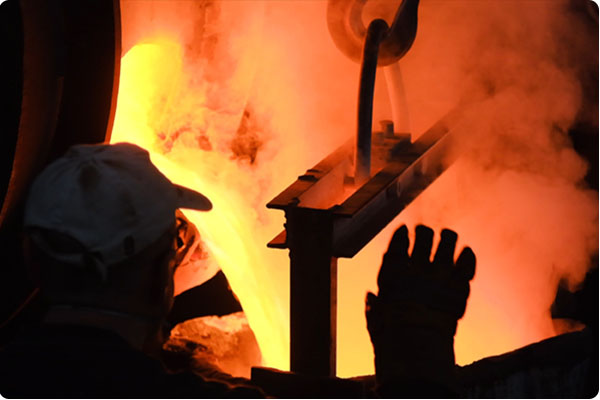 Forging is a manufacturing process involving the shaping of metal using localized compressive forces. The blows are delivered with a hammer (often a power hammer) or a die. Forging is often classified according to the temperature at which it is performed: cold forging (a type of cold working), warm forging, or hot forging (a type of hot working). For the latter two, the metal is heated, usually in a forge. Forged parts can range in weight from less than a kilogram to hundreds of metric tons. Forging has been done by smiths for millennia; the traditional products were kitchenware, hardware, hand tools, edged weapons, and jewelry.

Since the Industrial Revolution, forged parts are widely used in mechanisms and machines wherever a component requires high strength; such forgings usually require further processing (such as machining) to achieve a finished part.

Today, forging is a major worldwide industry. Forgings are an important part of the oil and gas industry. There are many forgings companies located throughout Europe, including Italy, Germany, and England. A few forgings companies remain in the US but are limited in size.

Above photograph of forgings produced for a drilling riser system to be used in the GOM. These forgings were produced in Sweden.

Page load link
Don't have an account yet? Register Now
Go to Top